One of Australia’s preeminent figures behind the scenes of Victorian sport, Noeleen Dix’s decision to call time on her 30+ year career across Netball Victoria, Netball Australia and Masters Swimming Australia has coincided with a Member of the Order of Australia (AM) honour.

Dix will continue to assist with events such as the Global Games in Brisbane this October but knew the timing was right to end her most recent tenure as General Manager of Masters Swimming Australia (MSA).

“I have been with MSA for over ten years and the organisation is in a really good place,” Dix said.

“One of the highlights of my time is we now have a greater connection with Swimming Australia and change is healthy for all small organisations, so it was time for me to move on.”

Before becoming a key figure on the administrative side of sport, Dix played netball for Victoria as well as Australia in four international tests between 1981-82.

She then moved away from the court in 1984, taking up an opportunity as a Victorian state coaching director.

“I met so many great people in that role, saw amazing places while traveling around Victoria over two years and after playing netball at the highest level, I gained an insight into how the sport ran at the grassroots level.”

Those experiences sparked Dix’s desire to build the capacity of Victoria’s regional areas and to capitalise on the incredible work she had witnessed from women and volunteers.

As fate would have it, an executive director position at Netball Victoria opened up and Dix jumped at the opportunity.

“It was a very formative time for the sport,” she said.

“We were able to implement a number of positive and permanent changes including turning a focus towards assisting those regional areas of Victoria.”

Dix continued to make significant changes through a role as today’s equivalent of Netball Australia CEO, working with Presidents Deirdre Hyland and Margaret Pewtress during her tenure, before taking on the role as General Manager of the 1991 Netball World Championships in Sydney.

“I had been involved in the bidding process for the World Championships and as I was recently married and starting a family, the part-time role was perfect,” Dix said.

“There were a number of landmark moments that came with that tournament, one of which was that it was the first World Champs played indoors.

“It was also the first time the tournament was broadcast live on Australian television and we were able to manipulate the schedule so that the Aussie games were in prime-time viewing.

“Bob Hawke was present for the final which was sensational for promotional purposes as well and then we beat New Zealand in the final by a point with a goal in the dying seconds of the game.

“Those things really helped us lift the bar in the promotion of the sport.

“We knew there were a lot of women in Australia that played netball but did not necessarily identify with the game. That started to change in 1991.”

With her passion for events ignited, Dix went on to help organise the 1995 Australian Masters Games, the Under-22 men’s basketball World Championships in 1997 and the 2006 Melbourne Commonwealth Games where she served as Competition Manager with oversight of all 16 sports.

“That is one of my fondest career memories. Putting the planning together over four years, liaising with international bodies and technical delegates as well as so many hard-working delivery staff and volunteers before pulling it off pretty much without a hitch, it was a great time.”

“I had actually played netball with Kate years earlier and with the Board, we set out on a path of professionalising the national competition.

In 2008, the respective Australian and New Zealand national competitions were replaced by the ANZ Championship while the difficult decision was made to leave the ABC and bring netball to commercial television.

Dix also played a major role in the bidding and successful running of the 2015 Netball World Cup in Sydney and, utilising learnings from the 2006 Commonwealth Games, delivered not just the tournament but an event and an experience.

“From when I started, netball has grown exponentially,” she said.

“We’ve gone from a sport that was reported on a weekly basis quite close to the newspaper obituaries to being considered an elite, professional sport with incredible athletes and a strong supporter base across the world.

“I look back on the times when women’s sport was ignored by the wider community but what we did in terms of professionalising netball is now the norm across a lot of codes and that offers more choices for all girls and women.”

Dix’s commitment to the growth of the sport was a contributing factor to her Member of the Order of Australia honour earlier this year.

While receiving the award was a thrill, Dix said the overwhelming emotion was how humbled it made her feel.

“I never did anything for any awards but I know the things that the sport achieved were substantial. I think in my ten years as President with netball, we really accelerated the growth of the sport and I am proud of being part of the leadership team that created that momentum.”

Football Victoria demand respect for all involved in the game.

Bowls Clubs Open Their Doors to the Community 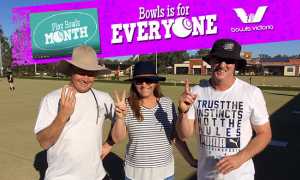 Launched in October 2016, Play Bowls Month was a new initiative from Bowls Victoria with the aim of to get more inactive Victorians active through bowls in addition to building the network of clubs delivering non-traditional/social formats of the game including Barefoot Bowls and Jack Attack. 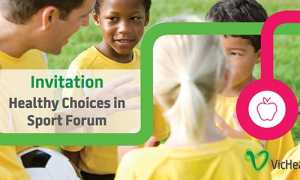 VicHealth and Vicsport have partnered together to give you the opportunity to learn how to implement healthy choices at your sporting club at the Healthy Choice in Sport Forum on Wednesday.