A new initiative from Vicsport, the Innovation Lab has helped City of Casey shape a plan to enable CALD (Culturally and Linguistically Diverse) women to deliver physical activity programs in their municipality.

Supported by VicHealth, the aim of the Innovation Lab is to assist all organisations including SSAs, their affiliated clubs and associations, RSAs and LGAs with the development of new ideas that will increase participation in sport or recreation by less active Victorians.

City of Casey approached Vicsport after previous initiatives found women from CALD communities were more likely to participate if physical activity instructors and personal trainers were also from a CALD background.

A diverse group, CALD can include refugees, asylum seekers and migrants, people who speak English as a second language, members of varying faith and multicultural groups, people who may be socially isolated as well as people new to the City of Casey.

With a limited amount of appropriately trained women from that demographic, Casey aimed to locate more CALD women interested in becoming qualified to run their own physical activity sessions.

To address this aim, Vicsport Participation & Innovation Manager Tom Dixon created a plan to explore how to recruit and train CALD women.

“At the start, we mapped out how our goal could be achieved using human centred design processes, including gathering user insights through mixed method research,” said Dixon.

“City of Casey had contacts with relevant organisations so with the Centre for Multicultural Youth, the South Migrant & Refugee Centre, Women's Association South East Melbourne Australia and sport industry experts we held three initial workshops to discover who the audience is and the assumptions we currently hold about that audience before developing a plan to speak with the audience directly.

“Through the human centred design process, we brought together qualitative and quantitative insights by conducting surveys via contacts Casey already had, holding one-on-one interviews with some CALD women and analysing population data from a website called .id.

“We then brought all that information together and synthesised it to work out what it means for the challenge we’re addressing. The goal is to build empathy and understanding with our audience and to do that, it’s best to collect a lot of insights and identify the key themes to figure out some ideas.” 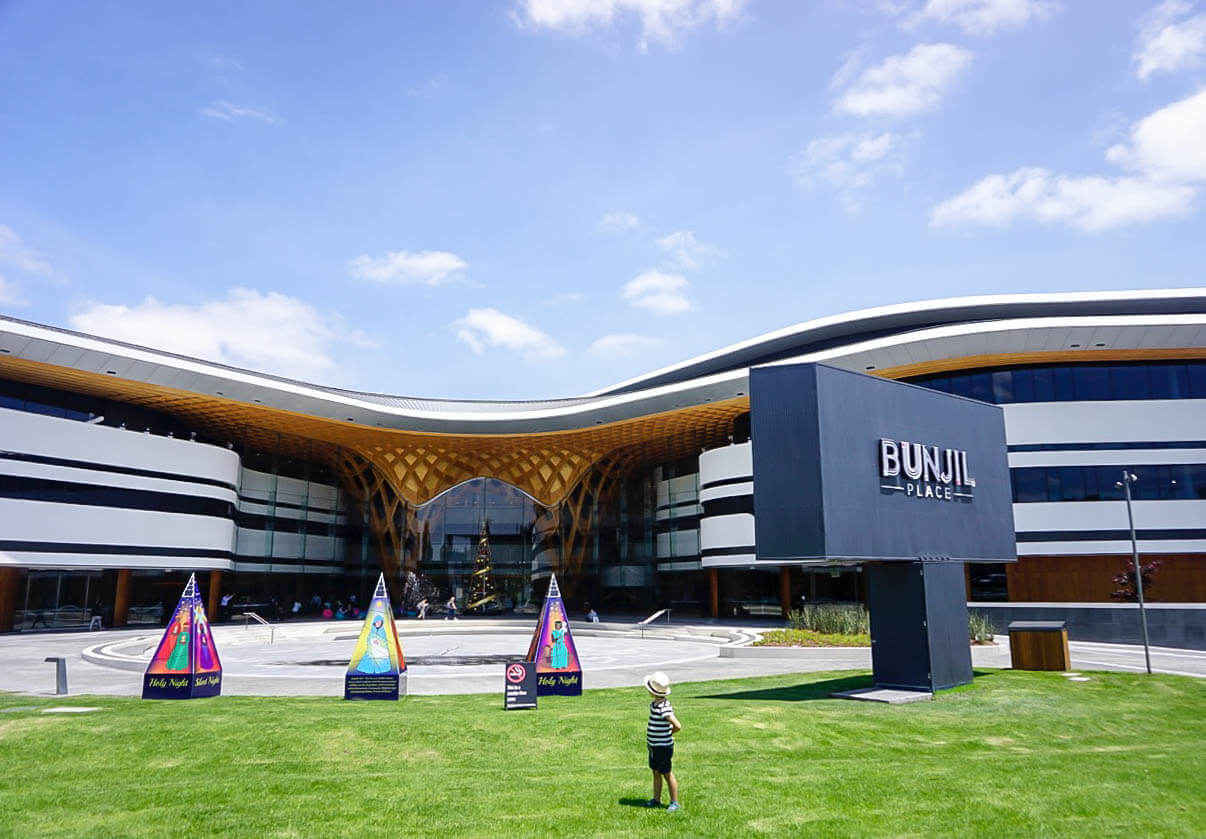 The research found City of Casey has a vibrant CALD community with almost 22,000 women aged 25-44 who were born overseas currently living in the municipality. They prefer active recreation activities such as yoga, swimming and walking over traditional sport while also valuing social interaction as a centrepiece with 55% of surveyed women seeing themselves as a potential activity leader.

The barriers to participation included finding time, not prioritising their own self-care, and a lack of familiarity with their environment and/or instructors.

Following those findings, Dixon got together with Jude Glenny and Anuya Ketkar, the main drivers of the initiative from City of Casey, across two two-hour online sessions to re-address the initial mission statement.

“The core elements of what we are aiming for do not change but re-addressing the mission statement is something we teach in the Vicsport Sport Jam and is something I don’t think a lot of people in sport consider,” Dixon said.

“The three of us put any insights we had gathered (a comment from a conversation, a quote from a survey, a statistic etc.) on a post-it note on Miro. We collated that into themes and then worked on a process called triangulation where we pick different insights from different themes and see if we can find a theme that rings true. We then wrote about 30 different modified mission statements and decided on the final one.

“That process took longer than we thought but we gave ourselves time in between to digest all the information and ultimately we found it very rewarding. Understanding that we are still being creative as long as we are responding to the data, allowing ourselves the space and time to digest the insights and not rush to decisions or conclusions was really important and is a good lesson for all of us in sport.” 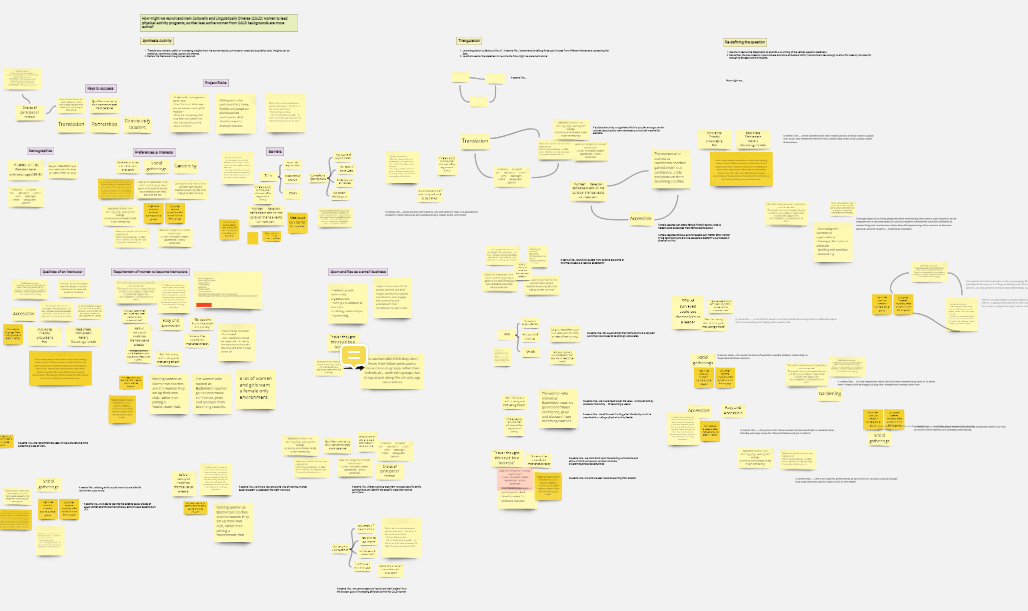 Perfectly messy- the online insights board

Ultimately, the change to the mission statement was slight but important with the aim changing from “How might we recruit and train CALD women to lead physical activity programs, so that less active women from CALD backgrounds are more active?” to “How might we create an inspiring, supportive opportunity for CALD women to lead physical activities, so that CALD women and girls are afforded appropriate choices and social opportunities to be more active?”

The next step in the process was an ideation workshop which saw the organisation group reconvene, throwing around over 100 ideas to discuss and dissect.

“There’s a common myth in innovation that we’re trying to search for the perfect idea which will come to someone in a lightbulb moment,” said Dixon. “Ideation includes brainstorming and is about coming up with a quantity of ideas rather than worrying about quality, trying to be creative in the process and approaching the question from different angles.

“The first few ideas often will not be the best but we can use those to push ourselves further, while conducting the workshop in a group means you can build on other’s ideas as well. To start, people need to be clear on what the goal is and what insights have formed the mission statement otherwise everyone can go off on tangents. It’s also imperative that everyone is relaxed and in a positive frame of mind.

“Once we had over 100 ideas of varying levels of details, we each voted on our top three and narrowed those down to four opportunities. These will still need to be re-worked and re-designed but they are workable ideas that City of Casey can use moving forward.”

City of Casey‘s Jude and Anu both found the Innovation Lab insightful and rewarding.

“The uniqueness of going through this process is that the whole concept of the Innovation Lab revolved around questioning some of our basic assumptions,” said Anu. “Some of those assumptions were shattered and some became more concrete. The mind-mapping and working with other stakeholders made it an extremely fruitful process.”

“The Innovation Lab enables true 'partner equity' by allowing for all voices to be heard throughout and provides clarity for any project ideas you may have,” added Jude.

For Dixon’s part, he will keep in touch with City of Casey as they embark on the next step of the journey.

“In conversation with Anu and Jude, they decided their immediate action will be to continue meeting with the group and crucially, continuing to engage with CALD women. That’s where the next innovation steps will come from, by giving the ideas to the direct participants and gauging their reactions.

“City of Casey must keep in mind that the ideas created could change completely based on future conversations with CALD women. They cannot get too focused on the ideas coming out of the Innovation Lab being their only options but having them as a base to further build those collaborations will serve them best for the future.”