Walking basketball is the talk of the town – with a feature on Channel 10’s News Bulletin on 30 August and a viral video.

The video was easily produced with an handheld camera by the Basketball Victoria media and communication team and took around 4 hours to complete including filming the session and post production. Albert Osei-Tutu, Development Officer for Basketball Victoria attributes the success of the video to the heart warming content, and that is relatable, something that anyone could try, which makes it attractive to lots of people. Overall, the link to the community has enabled the program to get a solid start, connecting through councils, associations and community groups.

The program ran in various locations across Victoria. The initial target for generally getting people active has expanded to include seniors, who have embraced a new opportunity for participation in a sport they, and their families, can relate to.

In Knox, Basketball Victoria partnered with a Knox City Council seniors group to encourage their attendance, hosting their oldest competitor who recently celebrated their 93rd birthday! They commented that the program was “Great fun, gave me more energy to move and I love socialising among happy people. I think having a sense of humour is important and Walking Basketball brings it out of all of us”.

This older group of participants turned out to be fiercely competitive and started the program with a familiarisation of ball handling skills and basic movements before progress to the game format, which allowed for them to transition into the play more easily.

The program also targeted the Bendigo area based on data mapped from the Heart Foundation and in line with the Australian Bureau of Statistics figures that show less than one third of Australian’s get enough exercise to benefit their health. The game is an informal opportunity to participate in a team sport for those people that might otherwise be intimidated by the pace and impact of customary basketball.

Basketball Victoria’s newest players in Bendigo said that some people organised teams, while other people just turned up to join a group and form a team. Substitutions are allowed on and off the court at any time and no official score is kept, with the players commenting that reducing the competitive aspect of the game format was appealing.

Return to Knowledge Exchange or select your next article: 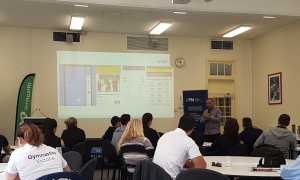 Tavale Ilalio - Project Officer at NRL Vic – has been kicking goals driving participation in touch rugby. We asked Tavale about how he is supporting Rugby League clubs to introduce touch football.