Vicsport congratulates current Chairman Margot Foster who was appointed a Member (AM) in the General Division of the Order of Australia in yesterday’s Queen Birthday Honour announcements.

Ms Foster was honoured for significant service to sports administration and governance at both state and national level, as an elite athlete and a support for women in sport.

Ms Foster has held many Board and committee positions in sport with a variety of organisations including the Australian Olympic Committee, Melbourne’s 1996 Olympic Bid Committee, Rowing Australia, Rowing Victoria, Melbourne University Boat Club, Australian & New Zealand Sports Law Association, the inaugural Melbourne (now Victorian) Major Events Company, Womensport Victoria (which she founded) and Womensport Australia, Melbourne and many others. Margot has been a Board member of the Australian Sports Commission and the New Zealand equivalent SPARC.

“Margot has been a huge contributor to Victorian and Australian sport over many years and this recognition is a fitting acknowledgement of the time and effort she has put in. Victorian sport is currently benefitting directly from Margot’s knowledge and experience through her role as the Chairman of Vicsport and behalf of all Vicsport members and stakeholders it is my pleasure to congratulate Margot on her latest honour.” said Mr Mark McAllion, CEO of Vicsport.

Vicsport also congratulates the many sport related recipients of 2015 Queen’s Birthday Honours, including Mr John Howie who was appointed a Member (AM) in the General Division of the Order of Australia for his significant service to the community of Victoria, particularly through his leadership of film, arts, sporting organisations and to the law.

John also made a very valuable contribution to Vicsport as a Director of Vicsport for 14 years and served as Chairman between 2002 and 2008.  Vicsport is delighted that John has also been acknowledged for his contribution to sport and the community. 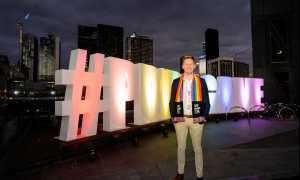 In light of the inaugural AFL pride game, Jason Ball sat down with Vicsport to reflect on where it all began, how far sport has come and the body of work that needs to follow.